The Little Library That Could 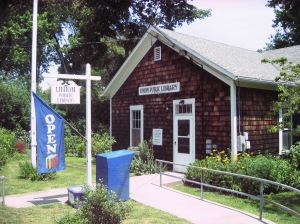 Tiverton’s tiny library has been running purely with volunteers for over 120 years. It’s a small town in New England, on the way to a lot of other places, and has recently started sprouting dive-by art galleries in addition to the well-established ice-cream stands (very helpful on days like the one when I visited) and grocery stores.

The librarian on duty the day I went got into it because his mum, sorry, mom, had been one for thirty years. There was an illustrated guide to how the town had celebrated the Bicentennial, some time before he was born.

The children’s section was a particular joy. Many of the books are obviously well-loved but in good repair and have been there since I was a child. Their Paddington books are first editions, with references to half-crowns and ha’pennies. They have Ian Fleming’s first Chitty Chitty Bang Bang from before anyone thought to make a film of it. But better yet, all the American kid’s books I missed out on were there, except for New England’s favourite, Make Way for Ducklings, but lots of other Robert McClosky titles were there to be had.

(I’d wanted to see the Duckling book since I got there. Apart from its fame, I’d been puzzled on my first proper visit to Boston to see bronze ducks in ice-hockey shirts with what I first thought said ‘Boston Strangler’ on. It was, as I soon discovered, the ‘Boston Strong’ message after the bombing of the Marathon in spring: http://en.wikipedia.org/wiki/Make_Way_for_Ducklings  ) 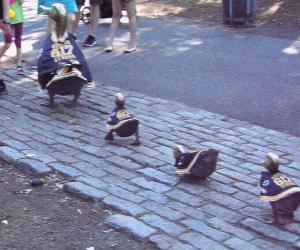 This bit of America is very historically-minded, as, by American standards, they’ve got quite a bit of it. Most of it happened before the Europeans arrived and they had some scholarly teen-orientated books on the resident nations and what happened to them. The main ones around were the Narragansett, who had good relations with the English settlers until the 1640s; this area’s settlers were on the wrong side of the Civil War in England and the tribes who’d been pals with the Puritans (there were some) used this as an excuse to settle some other old scores.

And, of course, the subscribers trace their family trees. This is a resource they offer in this library that has made it a particular success. The reference and family-records section is the size of a large wardrobe but is phenomenally efficient. 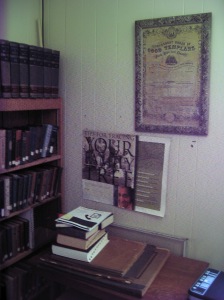 The entire non-fiction section is about the size of our library room but has books from this year and some dating to the 1920s. The whole of Rhode Island’s library service is based on the idea that a book in usable condition is to be kept, and I spent much of the summer (and last Christmas) reading books nobody had got out for decades, some dating to World War I.

Nonetheless, they manage to keep up with current interests, especially in the teenage section

And are well-stocked for current periodicals.

I don’t know about the rest of the country but New England seems to have integrated volunteer-run libraries and state-funded bodies smoothly. Some parts of the state system have found unorthodox methods of fundraising:

Although they are as prone to grumbling about the punters as any of us:

This website uses cookies to improve your experience while you navigate through the website. Out of these, the cookies that are categorized as necessary are stored on your browser as they are essential for the working of basic functionalities of the website. We also use third-party cookies that help us analyze and understand how you use this website. These cookies will be stored in your browser only with your consent. You also have the option to opt-out of these cookies. But opting out of some of these cookies may affect your browsing experience.
Necessary Always Enabled
Necessary cookies are absolutely essential for the website to function properly. This category only includes cookies that ensures basic functionalities and security features of the website. These cookies do not store any personal information.
Non-necessary
Any cookies that may not be particularly necessary for the website to function and is used specifically to collect user personal data via analytics, ads, other embedded contents are termed as non-necessary cookies. It is mandatory to procure user consent prior to running these cookies on your website.
SAVE & ACCEPT